My webcomic Negative One hit its 600th issue last week.

In honor of the milestone, I tried a slightly different art style, using neutral gray markers instead of my usual sketchy pencil. It was an interesting change. 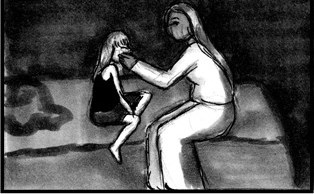 My mom was watching me draw this issue while she was hanging out at my house. She asked me to tell her what everyone thought of the different illustrations, and I told her I probably wouldn’t get many comments. She disagreed and I said, “No, really, almost nobody comments on the comic.” And she said, “Well then why do you do it?”

No offense to my mom of course, but this is kind of a bad question to ask an artist. I think she was asking because she wanted to know why I do it if not for feedback and evidence of audience enjoyment, but as a creator you can’t help but wonder if such a question implies that you shouldn’t make a work that gets little attention.

She understood and validated my response, though, and made it clear she accepted the inherent worth of the art form based on my relationship with it. I’ll share that with you here.

Negative One is the result of my decision to “retire” a fantasy series I wrote in college. I wrote it during an enduring stream of enthusiasm for a good number of years, and for a while I thought I would be able to sell it, but I didn’t even really work up to a solid try for publication before I’d realized (along with my research on how one approaches selling a story) that these particular books were never going to be publishable. At least, they’d never be publishable how they were, not even with significant editing, unless I fundamentally changed the nature of the books. And I didn’t want to.

I didn’t want to change what the books were about to make them more mainstream, and I ultimately decided this was a personal story that I wanted to tell without restrictions. There’s a time and a place for that, and as a form of self-publishing, webcomics felt like that time and place for me.

I don’t intend to sell this. I don’t intend to make any money at it (don’t even, in fact, have a system in place to collect money for it even if I wanted to). I just want to make it on my own terms, once a week like I have for over eleven years, and keep telling the story I like about the characters I like to enjoy it the way I like it. It’s out there for other people who like stories like this to read if they please. It’s out there to ignore if people want to do that, too, and they do. There have been a few random fans of the comic who have interacted with me intensely for a while and then disappeared, and I have some friends who follow the comic either weekly or off-and-on. I see a little spike in the stats on its update day, so I know it has some loyal readers. But it’s not popular, and I’m not interested in doing anything differently to change that.

I’m satisfied with it and I love it. My more “mature” and “advanced” work has been molded by feedback and publishing expectations and restrictions and reading environments. That’s also fine. But as a person who has accepted feedback and incorporated foreign perspectives for plenty of other works, it’s comforting to have one thing where I don’t do that. That I’ve created a little niche for myself where I make something that’s just mine. I’m free to do it however I like since I ask for nothing from my audience and depend on no one for the means to share it (beyond, you know, paying for my website and the utilities that allow me to access my computer/Internet). If someone doesn’t like something I do or how I do it, they can deal with it by not reading, and absolutely nothing changes for me. And I think having an oasis like that is a good grounding opportunity for a writer who usually does field a large amount of feedback and compromises with plenty of restrictions.

Negative One is a quiet story that I do for nobody but me, but I invite people to participate by putting it on the Internet. If it’s your thing, I hope you enjoy it. And though I adore feedback from people who connected with what it’s saying, I don’t need my readers to speak up. I think a lot of people who like Negative One are the quiet types who don’t need to communicate with creators for the creators to communicate with them.

I recommend that any writers who are struggling with feedback or are feeling overwhelmed by expectations carve out a sanctuary like this for yourself. A story that’s yours where you can retreat if you need to. It might not seem like much, but it’s made a big difference in my life. Maybe you’ll feel the same.