Seriously though, there’s some nerdy stuff coming. With math, data, and graphs! RUN!

Because you see, some of us got kind of a lot of submissions. Like, for instance, yours truly.

(Technically 103, but two of them were for Young Adult manuscripts, and I was not allowed to take Young Adult. I am a New Adult and Adult mentor only!)

I’ve only read a small percentage of my inbox–about 15%–and I’m going to chug through it this week. But since I’ve read very little of it, I can’t really offer you any meaningful reflections on what I’m thinking. What I CAN offer you is statistics. Lots of statistics! So . . . let’s start with category. How many Adult and how many New Adult did I get? 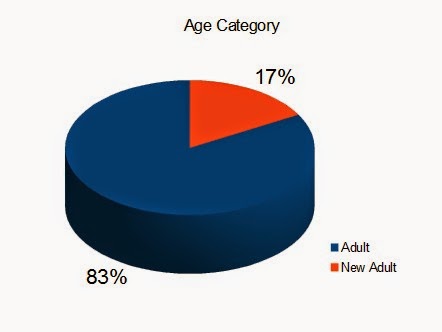 Of course, Adult dominated. New Adult is just getting off the ground, and not as many people write it.

Now here’s one I’m not too enthusiastic about doing, but people were talking about it/asking about it a little because there was a perception that guys are severely underrepresented in this contest, both amongst the mentors and amongst the entrants. I mostly have name data to go on and to guess someone’s gender based on traditionally male or female names, I have to make assumptions, and I also can’t reliably tell who among them, despite the name, might identify as a non-binary gender. But I took my best guess, and this is how it broke down if I had to guess the balance between male and female in the contest (based on my inbox): 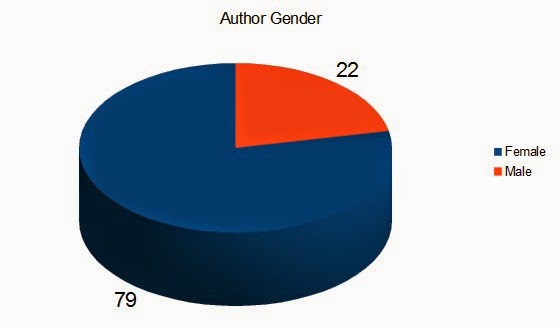 Yep. It’s a female-dominated contest. (I think we all know that publishing is pretty dominated by women, and yet lots of books by male authors get published, so. . . .)

Moving on to something else! What about . . . genre? What kind of genre breakdown did I see in my box? (You can click these charts to see them better if they’re too small or the blog configuration gets in the way.) 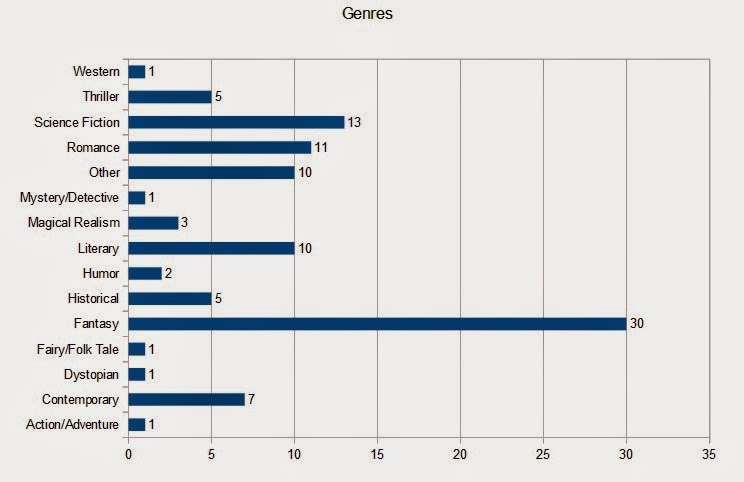 As you can see if the chart is visible to you, ten people chose “other.” Some of them did so even though their category was technically there, but it looks like they just wanted to be more specific. The “Other” category included one Experimental Fiction, one Christian, one Upmarket Women’s Fiction, two Urban Fantasy, one Historical Paranormal, two Women’s Fiction, one Mythic Retelling, and one Dystopian Paranormal.

What else, you might be saying . . . what else nerdy can you show me? Well, how about word count?

As you’d expect, nearly all the submissions are between 70,000 words and 100,000 words. It drops off sharply after 100K, but yeah, I did have two over 150,000. One person didn’t include their word count and they’re the question mark at the end. I also did get several novels under 60K which is weird to me for adults (most of them were not New Adult), and one was under 50K.

I’m super surprised I didn’t get the biggest books in the contest, though. I did say in my bio that I LIKE long books, and yet the other mentors got the 200,000+-word tomes! Wow!

Pitch Wars twins! Which mentors did I share the MOST submissions with?

Jami Nord is my supreme Pitch Wars twin, with 30 submissions in common. Just behind Jami are Amy Reichert and Natasha Neagle. Despite being my mentee last year, Whitney wasn’t even in the top five. We actually have somewhat different taste in books.

Okay, okay, that’s all the nerdery I have for you right now. Please tell me if you want me to analyze anything else!

Or don’t, so I can get through my submissions faster. 😉