Stephen King has a couple quotes about being a writer that I see tossed around fairly often. And to some extent, I agree with him. At least in spirit. 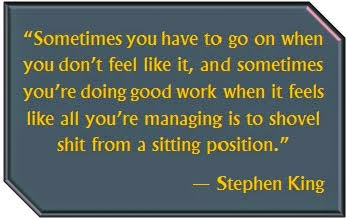 Both of these sentiments target the reluctant writer–the people who don’t treat writing like something they have to do, and may be making excuses for why they “can’t.” Now, I really hate excuses. I have definitely met people who think writing is this sacred thing that they completely cannot be expected to do unless they’re in a rare, delicate frame of mind completely unburdened by other cares and free of restrictions on their time, isolated from distractions and inspired besides. But these folks have probably been told some lies about writing, and don’t understand that they do have more power than they think they do. Sitting down to write when you don’t feel like it isn’t the same as forcing inspiration, and it isn’t a guarantee that you’re going to write garbage; you sometimes have no idea what’s going to pour out if you sit down and transport yourself.

That said, I didn’t want to write this week, so I didn’t. And it wasn’t because I was “waiting for inspiration” or not taking my writing seriously (rendering me an amateur). I’m not a big fan of the narrative that creative jobs are jobs that we can/should always be able to suck it up and perform, the way you might drag yourself to the office when you’re feeling under the weather or push through writing your term paper when you’re sleep deprived. There are also jobs you shouldn’t try to do when performing them poorly can have consequences to your health and the quality of the product, possibly leading to more work for you in the long run or damage to your ability to perform it in the future. There are some kinds of “I don’t want to/feel like I can’t” people can push through, and there are others that you can’t or shouldn’t. You might still play in the basketball championship with a cold, but not with a broken leg. You might still work on your novel when you’re not inspired, but not when doing so requires mental health sacrifices that lower your functionality throughout other aspects of your life.

Not to mention that building up guilt over not being able to write can be damaging by itself. If everyone tells you there’s no excuse for not sucking it up and pushing through it, you might end up even more stymied. Sometimes it really is okay to not produce. Especially if you don’t have a deadline and/or your deadlines/goals are set by you.

We can learn to determine our own limits and figure out what we can realistically push through. I am very, very serious about my writing and I don’t think anyone doubts that, but sometimes I don’t feel like making time for it/dredging up the energy for it. I simply wasn’t in the frame of mind this week that I felt was conducive to continuing on the project I’m currently writing, and there are a number of reasons for that. I’ve been preparing for a talk I have to give next week in Minnesota. I’ve been editing a friend’s book. And I’ve been thinking that the next chapter I intended to write isn’t actually ready to come out yet; I think there’s something missing. I might need to reread the book and figure out what else to tie up before I dive in and write that gigantic, catastrophic chapter that will bring the book crashing to its conclusion.

Those things are not excuses, and they’re not reasons I “can’t” (or reasons I think I can’t). They represent choices I made, and priorities I set in my life. There are legitimate situations when people “don’t have time” for something–some lives are indeed incredibly busy, especially those that involve caring for others–but a lot of “don’t have time” is actually “didn’t choose to make time.” I don’t want to feel like I have to apologize for not making time to write sometimes, and I absolutely don’t believe that I am rendered an amateur if writing is not my top priority every single day.

But yeah. If you’re waiting for inspiration or won’t write unless you “feel like it” . . . you might consider seeing what happens when you write anyway. Provided it will not hurt you in an unacceptable way. Do it because you love it, and do it because you can, and do it because sometimes it just feels good, but don’t do it because other people say you have to or else your authenticity as a writer is in question.