So it’s time for me to commit some nerdery around here.

Pitch Wars! The submissions window is closed! Which means I’ve received all the submissions I’m going to receive and I can now start narrowing it down. How would you like a peek inside my inbox?

Last year was pretty overwhelming. I had over 100 submissions (AND MY BOOK WAS RELEASING THE SAME WEEK). I tried to be a little more restrictive in my bio this year and make it clear that I honestly want to focus on SF/Fantasy/SpecFic, and really don’t want submissions featuring romance-centric stories or stories grounded entirely in reality. That seems to have worked a little; I did get fewer submissions this year than I got last year.

How many eligible submissions did I receive, you ask?

90 people would actually want goofy old me to mentor them. Hahaha. 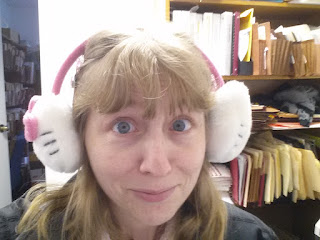 Now I’m going to show you some graphs, so please get out of here if that frightens you. (Or if the photo of me wearing Hello Kitty earmuffs frightens you.) (Or if I frighten you in general.)

I received 2 manuscripts that were not Adult or New Adult, so I’ll have to disqualify those. Of the remaining 90: How many were Adult and how many were New Adult? 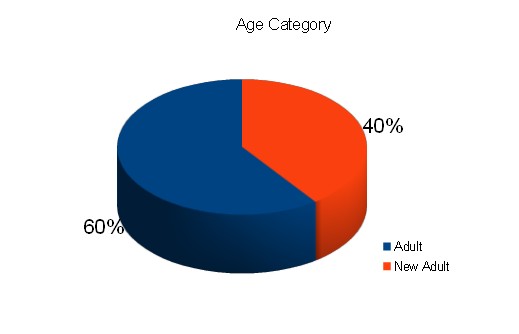 I was surprised by how many New Adult submissions I got! At first I thought there must have been a mistake because my first five submissions were all New Adult, and last year only 17% of my inbox was New Adult. It’s really growing as a category! And I have consistently chosen a mixture of Adult and New Adult manuscripts for my team in the past, so I would say the New Adult has just as much of a chance.

Last year we had drop-down boxes with predefined genres. This year we had fill-in-the-blank. I’m not a huge fan of that because people are notorious for making up their own genres or handing us four or five in one to make this weird fusion genre, and that makes it just that much harder to pitch. So first I’m going to show you a version of my genre breakdown with simplified genres (which you can click for a better view if it runs into the sidebar or doesn’t show up properly for you):

Now here’s what it looks like according to the authors’ interpretation of their genres: 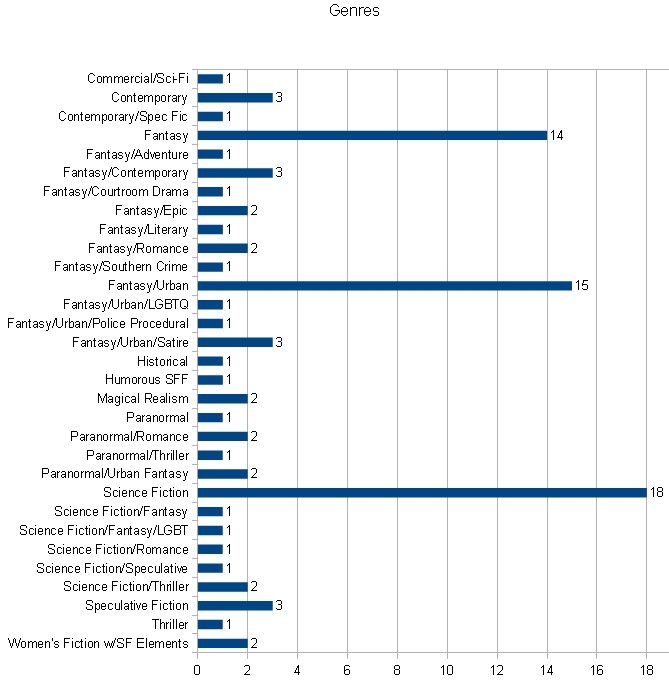 I think I prefer having it identified as a more easily categorized, mainstream genre first, then having “X with Y elements” or whatever just mentioned in the query somewhere. That helps agents understand how you think the book should be handled marketing-wise.

So, anyway. Clearly I got a ton of science fiction and fantasy! I’m excited that I got some with LGBT elements and some unconventional takes on the genres. Can’t wait to be dazzled by all the strange worlds (or weirdness lurking in our own world!).

So what else nerdy can I show you? How about some word count graphs?

Here is a representation of how long the books in my submission pile are.

Pitch Wars twins! Since submitting authors could choose five mentors, some of us were especially popular in certain genres. Which mentors did I share the MOST submissions with? 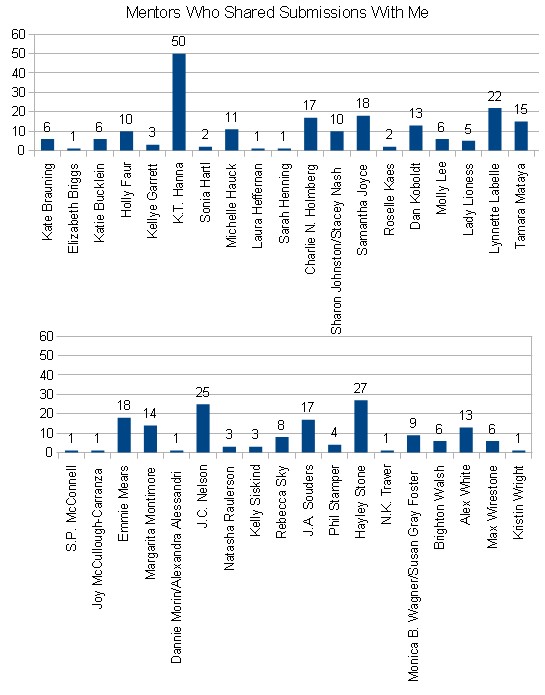 By far, the mentor with the most submissions in common with me is K.T. Hanna. We shared 50 submissions, which is more than half of my entire haul! Sounds like we must like a lot of the same things! Hayley Stone, J.C. Nelson, and Lynnette Labelle shared a large number with me as well, and I wasn’t surprised to see quite a few in common with Emmie Mears, Samantha Joyce, and Charlie N. Holmberg. A few of the folks listed above with submissions in common with me actually shouldn’t have been there, because occasionally someone would send a submission to a mentor who does not take that category (but some of the mentors on their list DO take the category).

I’m going through my submissions slowly and writing feedback as I go, just like the last couple years. We aren’t announcing our picks until September, so I’ve got some time, and I want to make sure to do a really nice thorough job. So far I’ve had a great time chugging through the submissions, and I can’t wait to find out which ones I’ll fall in love with.

Okay, so that’s enough of my splashing geekery all over you. Let me know if there’s another aspect of my submissions you want me to analyze for you, and we’ll see about getting some more graphs going! (You know I just want to be distracted, right?)

Hope you enjoyed that. 🙂