I finished NaNoWriMo 2019 with 50,768 words this month (and making the book In Bloom about 101,600 words total). I don’t plan to finish this book within NaNoWriMo–I’ll have to complete it and edit it through other means. 🙂

I thought I’d show off my space lesbians from In Bloom. 🙂

One day, though probably not super soon, I will wrap up Kamber and Joanne’s story.

Yeah, the writing program I once used to talk about never doing, but consented to try in 2018, and now am doing again in 2019.

I decided to continue 2018’s book! Because of course I’m a blathery weirdo and I’m sure I can get another 50,000 words out of this thing.

Wish me luck with another installment of working on In Bloom!

Wow! I knew I would be able to do 50,000 words in 30 days because typically I write faster than that, but this was a really great experience keeping me writing every day and keeping the pace consistent. I’m pleased to say my NaNo novel, In Bloom, hit 50,615 words on the last day of the event.

And I am a winner!

Yes I bought a shirt.

The book is not done of course–it’s not even close to being drafted, much less edited–but this was a great experience and I’d do it again.

Continuing to plug away at National Novel Writing Month with great success!

Yesterday, November 15, is the halfway point of the event, and therefore of course we writers are supposed to have hit our halfway point to 50,000 words on that date. 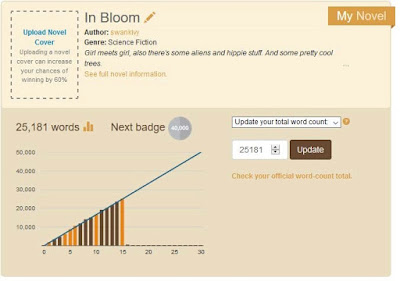 It’s weird. On the one hand, it’s sorta reassuring; I can still write at the drop of a hat whenever I want to, and if I do it every day, a novel starts to take shape. It’s not particularly sloppy for a first draft, it’s doing some pretty cool things that are surprising me, and I think the third person storytelling is helping me avoid the tendency to get super cerebral or engage in unnecessary navel gazing.

One small issue I am having is that the romance in the story is front and center, and I’m not sure about the balance I should strike. Obviously as an asexual and aromantic author who does not engage in these kinds of relationships, I’m sorta faking it, though that’s not a hard thing to do really with the media the way it is. I’ve grown up with stories that tell me how people experience this and how they write about it. It doesn’t seem mysterious to me at all beyond the fact that I have never personally been through it, and since I’m also writing about humans and aliens living on another planet and I have never done that either, it’s about the same level of guesswork.

But I want it to feel authentic enough to NOT sound like it’s written by someone who’s guessing, and for that you need detail. So the issue then becomes, well, I’m writing about fifteen-year-olds getting interested in each other, and I’m a forty-year-old woman who doesn’t want to sound filthy if I get into too much detail about teenagers experimenting with, er, amorous relations.

So I’m aiming for sweet and a little hot sometimes, like it is for many people when they go through it. I’m focusing a lot on how it’s new or how it affects the characters as young members of families and communities, and on the unrealistic and very big thoughts they have that are nevertheless fully felt and legitimate despite lacking perspective.

I am definitely continuing to let some lessons I’ve learned from cartoons help me with my pacing. I’m still dealing with a little bit of “oh I thought of this thing, better dump it on the page now so I don’t forget,” but this is a first draft, so that’s to be expected. One thing I’ve learned from being such a Steven Universe fangirl is how satisfying a slow burn backstory reveal can be. I don’t have anything huge to dump to be honest, but I’ve learned that it’s still intriguing to do partial dumps of info that hint at more to come, and it will make people curious without irritating them too much when they don’t know.

It’s interesting how much of the main character’s daily life is actually super weird by our standards but I’m making it pretty everyday and only finding it important to mention when someone else finds it super weird. Because I don’t do much plotting and I make a lot of stuff up on the fly, I’m kinda discovering these things along with the characters, and I also seem to be planting things that I don’t actually know where they’ll go. I’m sure I can smooth things out later to make them look like they were intentionally moving in that direction, but for now there are a couple mysteries I’m considering actually just not solving, unless maybe the story does it for me without me trying.

There’s also the matter of a broken love triangle. In short, my protagonist’s race has a lot of beliefs that make outsiders view them as essentially a fertility cult, so their expectation that every girl will meet a boy and have babies is more than just a societal expectation; it’s a religion and a way of life. The protagonist believes she may be the first gay member of their species ever because there’s just no way to talk about it inside of her culture. But humans are also in the picture and they are known to have homosexuality in their species, so the protagonist does have some context–especially when she meets a cute human girl.

But of course, her culture is pushing her to start being interested in boys, and there is a specific boy entering the picture now. I figured when I conceived of him that he would exist, story-wise, to represent tradition and that he’d probably be pretty angry and feel slighted when the truth came out and she likes a girl. But after I actually met him in the story, it kinda seems like he’s confused about just about everything too and he doesn’t seem the type to be possessive about her. Now I’m starting to think a boy like him would be a good ally for her. And now I’m starting to think that when the time comes, he will say or do something essential for the story.

It’s weird how these things work.

National Novel Writing Month is going well for me. I wasn’t sure if it was going to. I have so much going on during November, and this is maybe the busiest November I’ve had yet. I basically kicked all this off doing some of my writing on the dang airplane because I didn’t have time to do it any other time.

What’s really interesting about NaNoWriMo for me is that the pacing gives me an excuse to stop.

I’m such a binge writer. When I get into things I just get absorbed and want to finish, and I sacrifice a lot of sleep and attention to do so.

NaNo is supposed to press people into short-term sustainable writing patterns to get them writing, push them to turn off the inner editor, incentivize them to write something so they get some practice and have something to sculpt later if they like what comes out. I haven’t historically had those problems, but the problem I do have is that I know how much writing takes out of me and I have been reluctant to start a project because I’m already overwhelmed and stressed.

But if I write a little bit each day and pace myself, and keep an eye on the word count, and stop when I’m around the goal, I don’t have to make huge adjustments to the rest of my life just to write a book in a relatively short amount of time.

Observations about my book so far:

I haven’t written anything new in a really long time so it looks like I need a kick in the ass. Guess I’m doing NaNoWriMo for the first time ever. Wish me luck.

(And come send a buddy request to swankivy if you want to connect with me. The search function seems to be misbehaving for some people so if you can’t find me, try to send me a message and add me from there.)

I once even wrote a blog post partially about why I will never do National Novel Writing Month, but I guess I never foresaw a future where I would do what I’ve been doing lately: going a couple years without writing any new fiction beyond comics. (Not that the comics are nothing. I keep up my weekly schedule of putting out a new fantasy comic on Fridays, and that’s kept the juices flowing somewhat, but it’s not the same as writing a novel.)

I like to think I’ll handle it the same as I handle any other obligation I’ve ever taken on: I take it seriously and fulfill it, especially if it has to do with writing. But it’s been a while since I banged out a novel and I’m planning to write one for which I’ve done no preparation, except that it’s based on some characters in a short story I wrote eighteen years ago.

I am kinda annoyed about the genres we can choose from for our novels, too. You can’t indicate it’s fantasy AND YA, or YA AND LGBT+. I wish they wouldn’t try to list age categories and subject matter as “genres.” (In case you’re wondering, yes, I’m planning to write about gay teenage aliens.)